…celebrating the heroes of our time 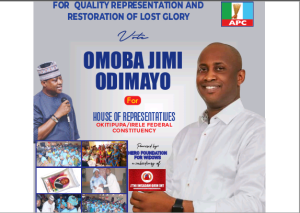 *The three core roles and responsibilities of the legislature are defined.*

Representation is about individual legislators speaking and working in favor of their constituencies for government interventions through infrastructural development and other life-enhancing deliverables which can be delivered through quality representation.

*Jimi Odimayo* promised inclusive government and best service for all.

Legislation involves making laws for peace, order and good governance. And then over-sight functions, technically called checks and balances, entail exercising control, monitoring and supervisory roles over the executive, to ensure efficiency in government as well as prevent waste in governance for the progress of the people.

But, while law-making and over-sight duties create the enabling pathways for the executive towards good governance, the latter demands effective synergy between the executive and the legislature for success. Whereas law-making is relatively a long-term approach, over-sight functions offer opportunities for more direct and immediate measures concerning some peculiar socio-economic and political challenges bedeviling third-world nations, particularly, areas to be represented. Hence, any legislature that is not mindful of the dictates of these mandates is not just a failure but a threat to the welfare and security of the people. And this is justifiably the reason legislatures are under attacks whenever the citizenry feels short-changed.

Prince Jimi Odimayo seek public (constituents) solid support and full collaboration in order for him to actualize these big ideas of capacity representation and stronger negotiation power for the constituency and nation at large.

This understandably, necessitated the resolve and passion of a business Mogul an entrepreneur expert, *2023 (APC) Okitipupa/Irele Federal Constituency preferred candidate* (Prince Jimi Odimayo) to represent his people in the *Green Chambers* for quality representation that would contribute immensely to the Nigeria development, commitment to the well-being and safety of the masses, shared-vision and unity of purpose among colleagues, bi-partisanship, harmony among the Chambers, transparency and inclusiveness. And above all, there would be deliberate collaboration between the executive and the legislature without in any way, compromising the independence of the two arms, primarily for the overall benefit of the people.

With these as major highlights of his launched legislative work steps agenda, I believe, it should be a thing of Joy to see a sound mind and courageous young man like the APC candidate; eager to work for better development of humanity at large in the Green Chambers of the House of Representatives in 2023.

Pls, get your PVC ready.